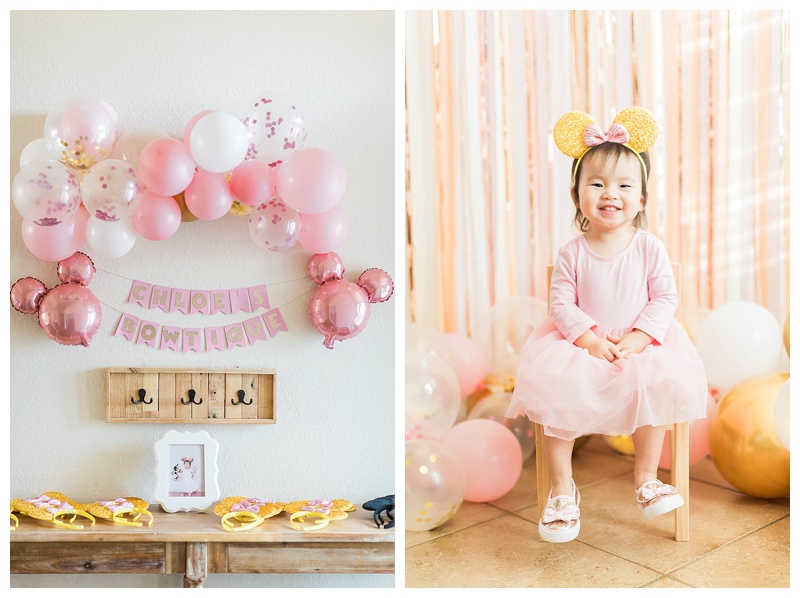 My sweet girl just turned 2 last week and I can’t help but share a few photos from her birthday party at our house last weekend. It was so much fun for me to put together a Minnie Mouse themed party! Of course I had to include plenty of pink and glitter! I will include some details of where I got everything in case you’re reading this and want to do a Minnie Mouse party for your little one!

I ordered pink and gold Minnie Mouse headbands off of Amazon and included some plain black Mickey ears for little boy guests. Chloe loves to watch Minnie’s Bowtoons on Disney +, so I made a banner for our entry way that said “Chloe’s Bowtique” with a small balloon garland and some pink Mickey ear balloons I ordered off of Etsy. I thought it was such a fun way to greet everyone when they came in the door, like they were shopping at Chloe’s little bowtique and got to pick up their own ears as they came in to party! 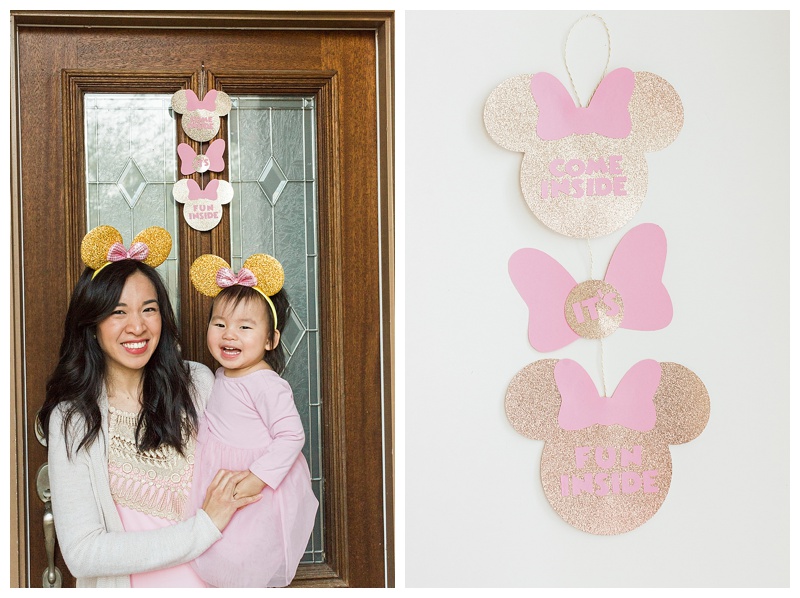 If you’ve seen an episode of Mickey Mouse Clubhouse,  you may read the door sign I made to the tune of the song in the beginning! I saw this idea on Pinterest and had to make one. I cut everything out with my Cricut, glued the letters and bows down, and taped some string on the back. It was so easy to assemble and so cute for the door! 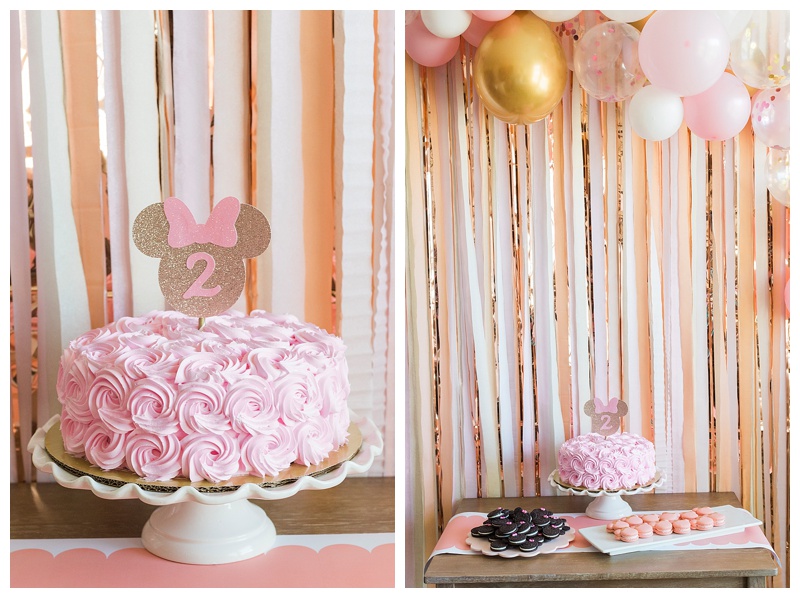 I ordered a 10 inch vanilla cake with strawberry filling from HEB! The rosette design is one that they are familiar with so I just asked for a light pink cake. I cut out her cake topper with my Cricut machine with gold and pink glitter card stock. Then I taped a paper straw to the back and stuck it right in the cake! We also had a little plate of Minnie Mouse oreos (more on those in a second) and Minnie Mouse macarons from a local macaron shop called Mon Cheri Macarons. If you’re in Houston, I would highly recommend them! They were strawberry flavored and so delicious! 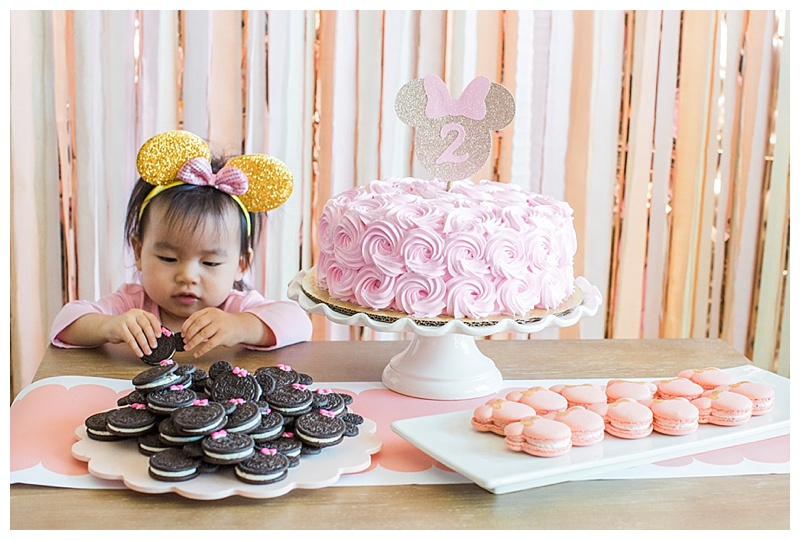 The Minnie Mouse Oreos were so easy to make. All you need to do is get one bag of mini Oreos, one pack of double stuffed Oreos, some heart shaped sprinkles, and a little bit of icing. We just took the mini Oreos apart, took off the icing, and stuck them into the double stuffed Oreos like they were Minnie ears. Then we put two heart shaped sprinkles together with a dab of icing to make them look like a little pink bow. They were so cute, and of course Chloe loved eating them! 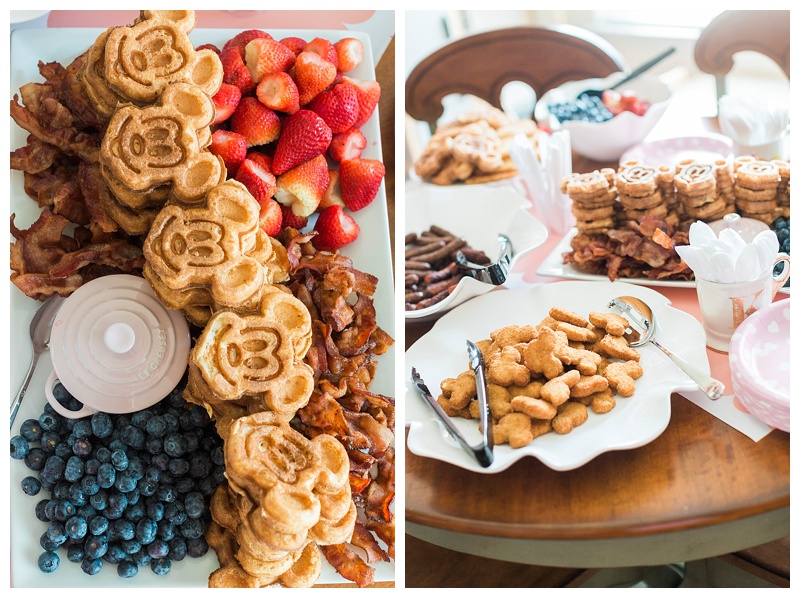 The party was from 10-12, so we wanted to have lots of brunch themed food. I tried to put off purchasing a Mickey Mouse waffle maker because of how pricey they are at the Disney store, but I finally broke down and got one. I may have used the party as an excuse to get it. While we were on our Disney Cruise last month, Chloe literally ate 10 waffles because that’s what she wanted for breakfast every morning. I knew she would love them, so we made a big stack for the party for all the guests to enjoy! I put syrup in a little Le Creuset pot and surrounded it with lots of bacon and fruit. We also had other plates filled with hash browns, sausage, and Mickey shaped nuggets (from HEB in the frozen section!). 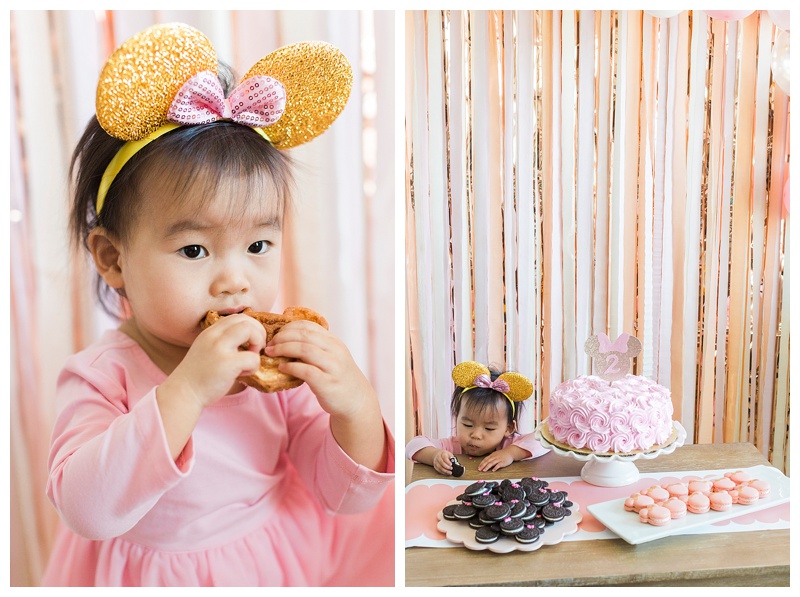 Food tastes better when it’s Mickey shaped! I had to get pictures of her eating all the food! 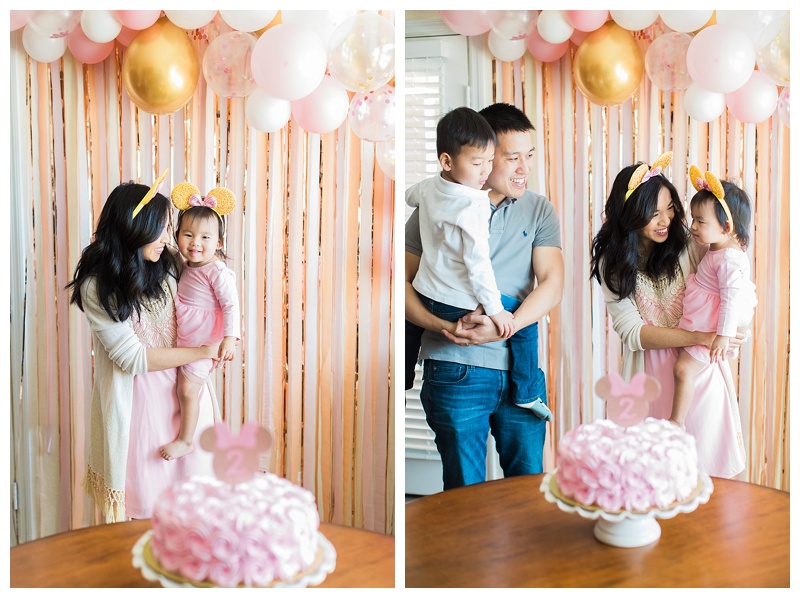 One of my favorite memories from her party was when everyone gathered in the kitchen to sing happy birthday to her. She had the cutest little grin on her face! 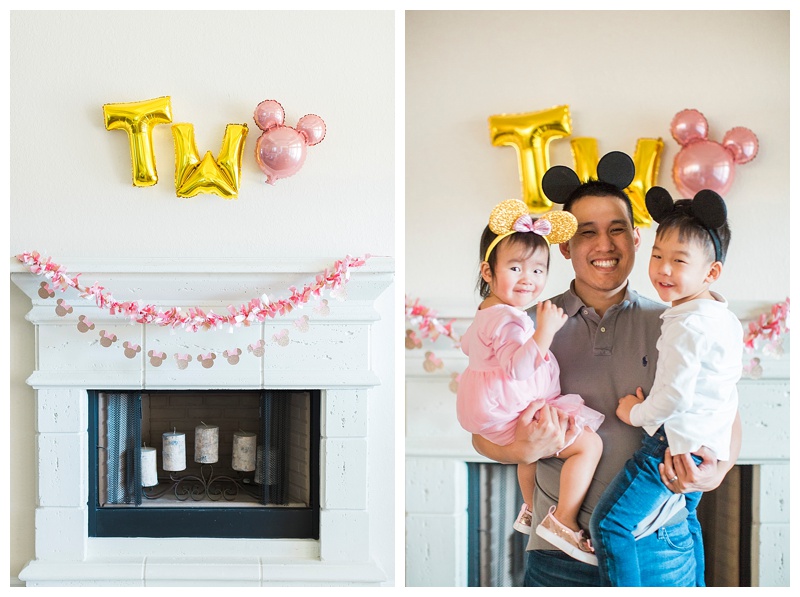 I wanted the mantle to be really fun and simple, so I put balloons on the wall with glue dots (it didn’t damage the paint when I took it off). I loved using another pink Mickey shaped balloon as the “O” in two! The pink ribbon garland is from Michael’s and I made the Minnie Mouse gold and pink glitter banner with my Cricut. 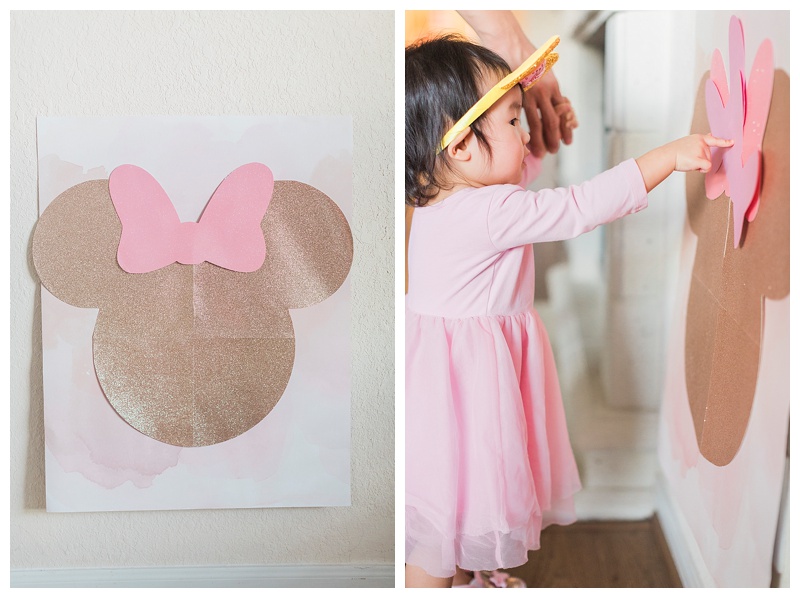 I loved making this “Pin the bow on Minnie” game! I bought posterboard from Hobby Lobby and cut out a big Minnie Mouse head in sections and then assembled it to be the size I wanted. Then I cut out a lot of bows from pink card stock. I just put tape on the back while the kids played and they loved it! Since Chloe is still so young, I didn’t do a blind fold. We just wanted to keep her party simple and fun! 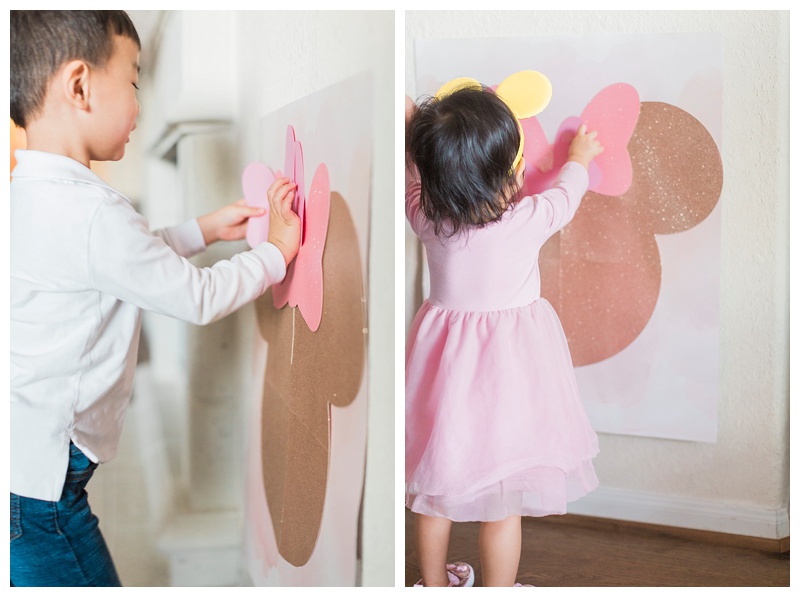 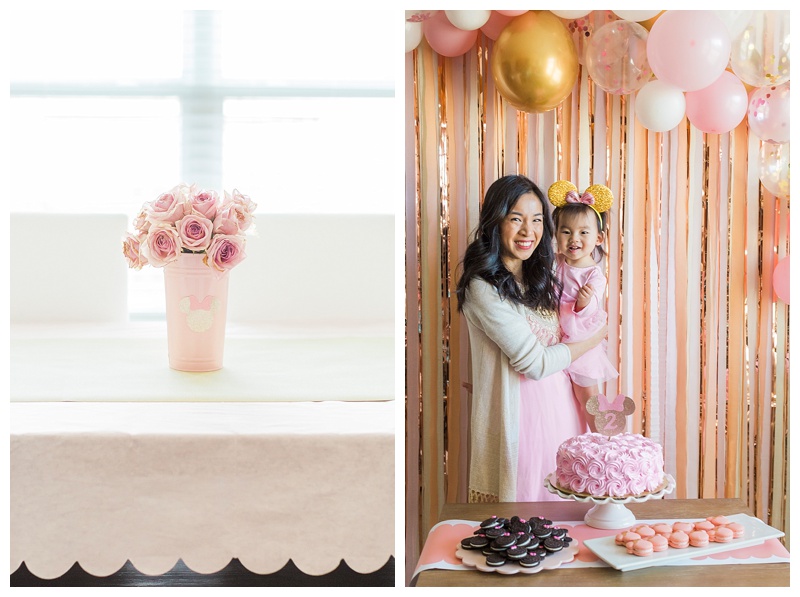 Our dining table was covered in a scalloped blush pink tablecloth and is the Spritz brand from Target – super affordable. I put a gold glitter table runner I already had over it. I purchased a dozen pink roses from Kroger on clearance for $3 after Valentine’s Day and put it in a pink metal vase we had from her party last year. Then I just taped a gold glitter Minnie Mouse head over it. Super simple centerpiece!

I almost forgot to include how I did the backdrop on the wall! It’s much simpler than it looks. I put masking tape on the wall and then just put streamers along it and cut it at the bottom. The balloon garland I ordered off of Amazon and then I used balloon tape to assemble it. I used command hooks to keep the balloon garland up on the wall. 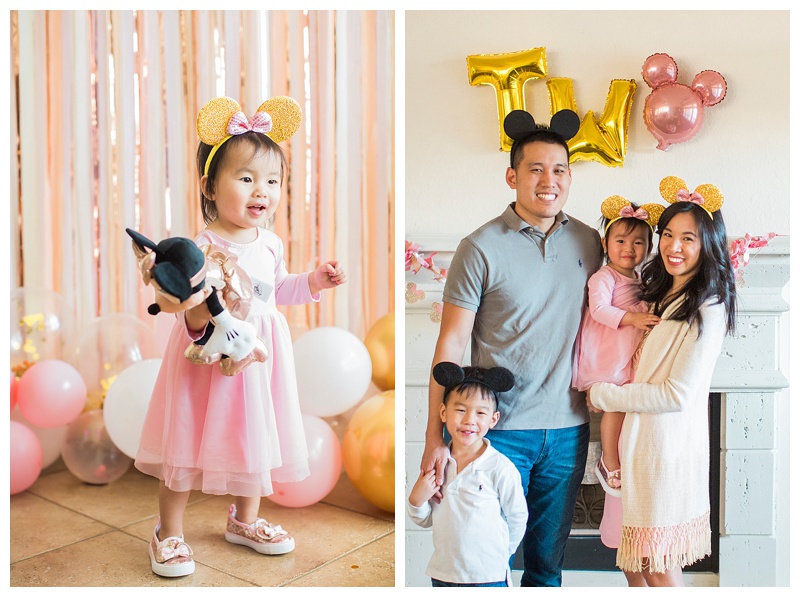 One perk of having the party at our house was that I took some pictures after the party was over and it was much more calm. I wish I had taken more during the party, but it’s so hard to be host, mom, and photographer! I always make sure to get a few good ones of her by herself so we have them to look back on every year. I really did enjoy throwing this party for her! I hope you find this post inspiring, and thanks for reading through to the end! 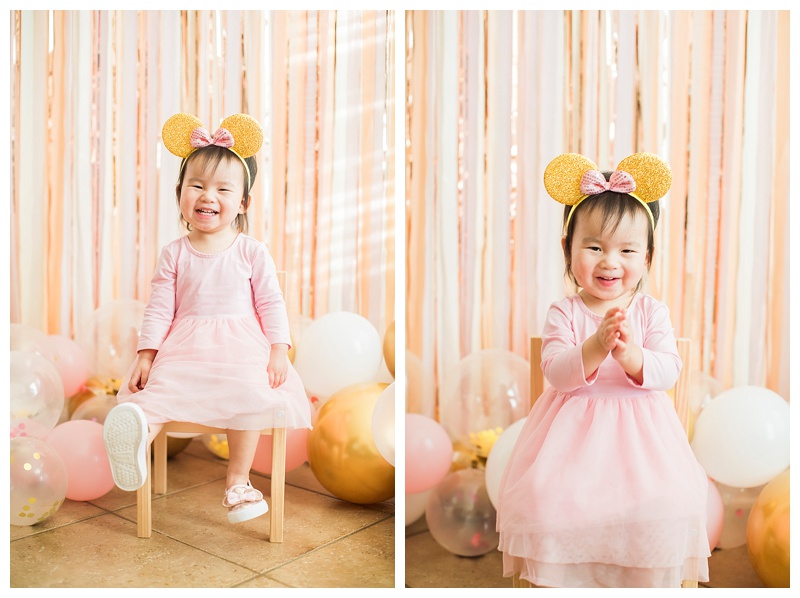 One Response to Chloe is two | Minnie Mouse Birthday Party